Railroad Earth is playing their final two shows of the year in Portland, Oregon, at the Roseland Theatre. The back to back concerts will take place on December 30th and New Years Eve. The only thing better than a New Years jam is two!

Eagerly anticipating their musical celebration of 2018 becoming 2019, we had a chat with multi-instrumentalist, Tim Carbone.

How did you first start playing music? And what instrument was it?

I first started playing music when I was 8 years old or something. I played in a little junior drum and bugle corps for the local fire department, and I played snare drum. I was in the drum corps. So, I played drums first. I got a little drum set, and when I say “little,” I mean really little. [Laughs] I got a snare drum on a stand and a cymbal. My brother and I started a local band when he was like 11 and I was 9 or something. We had a little kids’ band.

That’s awesome. I feel like that’s the way it should start out.

Yeah, you know, in my basement. And then a kid moved down the block and he had a full drum set, so it was like, “Alright you can be the drummer. I’ll play organ.” So, my parents had bought one of these little console organ kinda things, so I started to learn how to play that. And then I took violin lessons when I got into 5th grade. But briefly. [Laughs] I decided to learn how to play the violin because in my school system you could choose your instrument, and I was given orders from my parents to choose an instrument that they didn’t have to rent, which would have been drums, or a string instrument like violin or cello or viola or something. So, I knew that this girl that I had a crush on was gonna take the violin, so I  decided I would take the violin. So, I waited all summer to start violin lessons and be in the same class with this girl and it turned out she was an Air Force brat and she moved away over the summer. I never saw her again. [Laughs] So, I stuck with the fiddle, and I have Debbie Gibbons to thank. Thanks, Debbie! [Laughs]

Any plans on a follow-up to Railroad Earth’s Captain Nowhere?

As a music producer, how do you contribute to the production of Railroad Earth’s albums?

I’m just one of the voices in the pack. It’s a very different process for me when I produce a record. When I produce a record, usually that’s my job and that’s the whole focus of what I’m doing. Whereas, in Railroad Earth, occasionally we’ll use producers. We actually are going to have a producer on this record. Anders Osborne is producing this record. But normally, except for that one other time, Railroad Earth has usually self-produced their records. So, that’s like producing by committee, and then we generally have someone else mix it. Obviously, we would do revisions if we thought something needed to be changed. But, yeah it’s a completely different process. When I produce a record, I’m kinda leading the charge. Not even kinda. Somebody has to be in control of the sessions. We all kinda contribute to that role, but since I have the most experience, there are probably elements of what we do that I at least help the function of.

Your supergroup with members of New Monsoon and String Cheese, The Contribution; any desire to take that further?

We are still a band. We did a limited release of a new record last spring, but we’re gonna go ahead and do more of a national re-launch coming up early in 2019. Probably in February, but not exactly sure. We’re working on the dates. So, that’s still an on-going thing. It’s a slow-moving project because peoples’ schedules are so disparate. It took three years to make the second record. So yeah, it’s kind of like watching a glacier move. But you know, if you’ve ever seen a glacier, it’s pretty beautiful.

Obviously you all dealt with a terrible loss this year, the extremely talented Andy Goessling. Do you feel like the benefit with Positive Legacy was a success?

It was a fucking smashing success. We just wrote them a check for $10,000. Unbelievable, like beyond any expectations. We really didn’t have any expectations. We were like, “Hey this sounds like a great idea. Let’s try it. Holy shit, $10,000? Awesome. Just so you know, that $10,000 is going to literally build a medical center in the jungle for kids. Because it’s only going to cost $7000 to finish the building and then they’ll use the other $3000 to help supply it. They already built the frame of it. We were just there. It’s insane. It’s so amazing and gratifying. The Strings & Sol legacy has kind of taken on the local community that’s out in the jungle of Central Vallarta. Puerto Vallarta is the town that’s on the Caribbean, the part of Cancún that the festival’s in, but the place they’ve been honing in on and trying to help is Central Vallarta, which is out in the jungle. We helped build a school last year, and this year they’re putting in the medical center that’s next to the school. And these are very small. There’s like twenty students in a classroom. The building of the schoolroom is essentially two fairly large rooms, and the medical center is the same kinda thing. It’s like two decent-sized rooms with a roof overhead. Up until then, the kids didn’t have any place to go to school. They were being homeschooled, and not very well. And in Mexico, if you can build a medical center they legally have to provide a doctor for it. So, now they’re actually going to have a doctor for this community of about 150 people. So, it’s insane, yeah.  It’s a small community, but when you go in and you look and you see the kids, and this year they brought out a local small circus to do magic tricks and all kinds of goofy stuff. This was while we helped paint the medical center and helped paint murals and we planted a vegetable garden. And the kids had never seen a circus before. It was amazing to watch.

It’s fantastic. I think Andy would be extremely proud.

Anything in particular in 2019 you’re looking forward to?

That’s gotta be special for you guys since it was your first big break, right?

Yeah. And it’s been a while since we’ve been there. I guess it’s been about 6 or 7 years since we’ve been there. So, it’s nice to go back to that. You know, it’s just gonna be one of those years where we’re gonna work out what our next step is. We’re gonna be working on a new record and I’m curious to see how that’s gonna come out. For me personally, I’m looking forward to taking on some new producing projects and working on other peoples’ records and working on stuff of my own. I have another side-project that’s been really cool to work with. This group called Cedar Sparks, essentially myself and my friend Lou Rogai from a band called Lewis and Clark. We just put out a Christmas song. It’s right on Railroad Earth’s facebook page. It’s getting a really nice reaction from people.

I never have ‘em. I don’t do that mostly because I know that I don’t need a New Years’ resolution to make my mind up to do something. That could happen at any time of the year. The show at the Roseland’s gonna be fun. I love playing Portland. We always seem to have a really great time whenever we do New Years there, so I’m looking forward to that.

The Cedar Sparks Christmas song can be heard here:  https://cedarsparksmusic.bandcamp.com/track/gathering-song 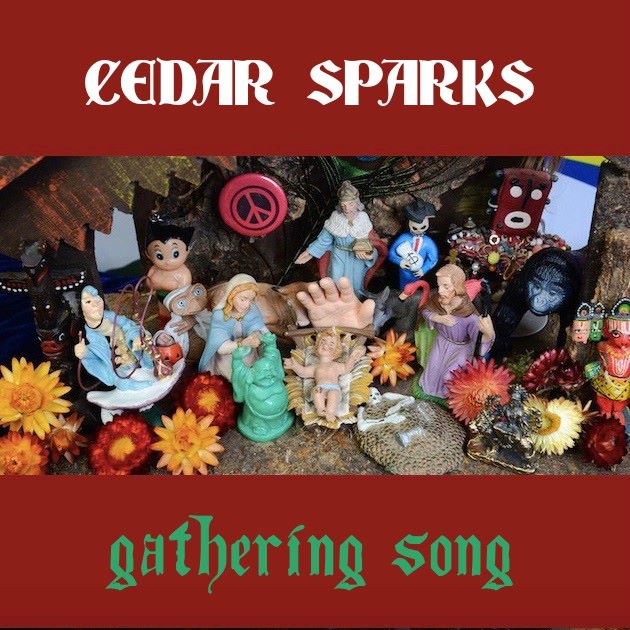