An undeniable part of the transformation is reflection. Feeling realigned after coming off a reflective 1-year hiatus, curators behind Gem and Jam have announced its return to Pima County Fairgrounds in Tucson, AZ during the weekend of January 31st - February 2nd nd of 2020. After rapidly blossoming for over a decade, Gem and Jam is set to return bigger and better than ever before. The music and arts festival is reforming to help bring in the new decade with a strong and focused vision on how to celebrate mineral formations in unison with aural sensations and positive vibrations.

The festival has stepped back into the festival circuit in a big way with a prime Gem and Jam 2020 lineup including Tipper, Big Gigantic, The Floozies, Manic Focus, Dirtwire, Christian Martin, RYBO, Lubelski, Desert Dwellers and many others. Great music combined with personal enrichment workshops in a serene desert location makes it obvious why this festival has become an underground sensation.

Here are 10 things to expect from the return of the best transformational festival that is Gem and Jam:

Located under an hour southeast from Tucson, the grounds has much more than sand and dust. Held inside the Pima County Fairgrounds, this sprawling piece of land makes for an ideal festival locale. Mesquite, cacti and grass are sprinkled about the landscape with a magnificent mountain range running parallel in the distance. Nothing short of a Wild West paradise.

Beat those wintertime blues when you arrive at Gem and Jam. Located in the sunny Arizona desert helps keep temperatures at a steady and comfortable warmth during the day before easing into a brisk but bearable evening musk. Perfect camping weather prime for pristine sunset views.

A recent and well-received addition to the Gem and Jam experience. By introducing a multitude of camping options over the past few years, the festival has opened the doors for many who thought a trip to the desert was impossible. Being offered this year are tent and RV camping as well as affordable travel package options.

Stay energized over the weekend with a tasty variety of food and drink choices. The festival has always been conscious of those with different dietary needs by providing everything from vegan to gluten-free and dairy-free options. Gem and Jam also features a plethora of heady crafts, high-end art and jewelry which can be partially accredited to the Tucson Gem Show going on that same weekend.

The biggest gem show in the world will be on full display the same weekend as the music festival. The Tucson Gem, Mineral and Fossil Showcase (aka The Tucson Gem and Mineral Show)  is a two-week event where some of the finest gemstones, rare minerals and extraordinary fossils are on display throughout the city of Tucson. Originally created as an after-party outlet for the gem show, Gem and Jam grew its own identity continuing to help commemorate these amazing natural phenomena through music and community.

An intimate setting makes for an easy flowing weekend of experiences. The festival origins trace back to small musical gatherings outside of the Gem Show featuring a collection of creative types, gem vendors and Arizona locals. Despite its rising national success, Gem and Jam has always been able to maintain a cozy, welcoming attitude since its inception. A place where the kindness is obvious and strong positivity flows. Gem and Jam is truly a cultural treasure.

The local community plays a huge part in what this festival has become. That includes the often- overlooked music scene in and around the Tucson/Phoenix area. Each year Gem and Jam does a great job showcasing its local flavor. While the headliners might be the attention grabber, do not overlook the amazing local acts including The Bennu, Endoplasmic, M-Q and Safi’s Lab.

When not mesmerized by music, wander the grounds to find several workshop spaces and enlightening lectures. These daytime activities look to engage the festival goer on a deeper level of awareness. In recent years activities included yoga and dance groups, breathing exercises, drum circles, sustainability presentations and more.

By adding top tier visual and performance, Gem and Jam transforms from music festival to multi-sensory extravaganza. Expect frequent fire spinning during those chilly evenings alongside astonishing aerials and flow throughout the weekend. Top tier painters will be located nearby the stages creating in the moment masterpieces. While no names have been announced yet, art alumni include Chris Dyer, Chris Bohlin and Alex Grey to name a few.

Gem and Jam did not rise in recognition through community, artwork and gemstones alone. The promoter’s ability to consistently curate a smashing lineup year after year has captured the attention of music lovers nationwide. While the music has maintained predominately electronic, there is something at this festival for everyone to listen and love. This year’s edition includes the sonic turntablism of Tipper, funk from Big Gigantic, and a House music takeover from the Desert Hearts crew. Those looking for more instrumentation will be happy to see the Bluegrass wonder boy Billy Strings, rising Jam twang rockers Twiddle, and a special TH3 set which includes members of The String Cheese Incident and The Floozies.

Gem and Jam Tickets are on sale now for this one of a kind Desert Festival oasis. Weekend passes are cheaper than most of its festival counterparts at the current tier of $159 plus tax and fees. Get the full experience and obtain a car camping pass for just $150 more. 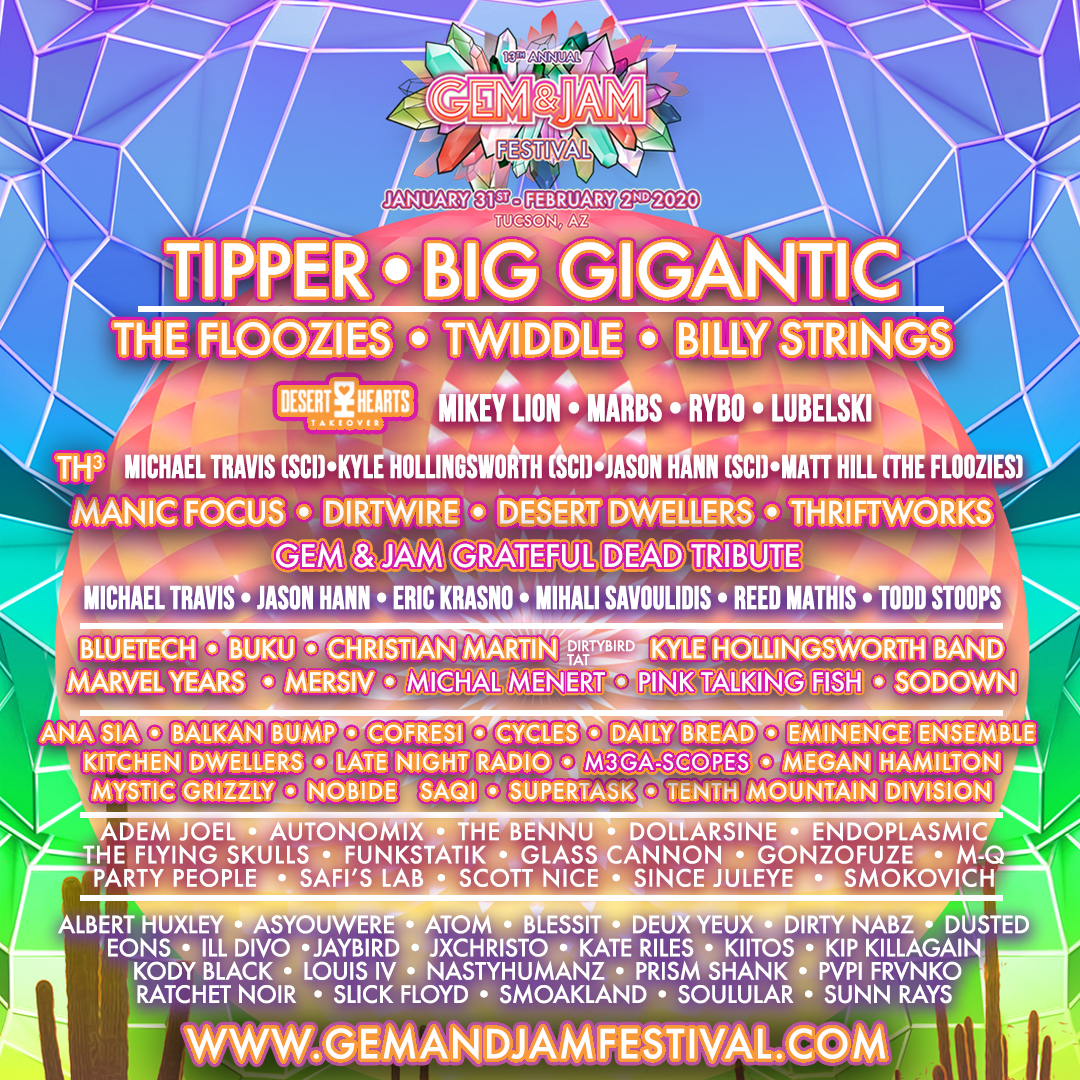